Radio controlled airplane competitions were a part of Roy and Jerry Kelly’s flying activities during the 1950s through 1980s. Pattern and Pylon racing required skill and speed. Then there were also events of a lighter nature such as Limbo and Balloon Busting. While Jerry was the flier, Roy often served as either Contest Director or in some other support role.

“I was there from the start,” commented Rick Kelly, who spent his teen years in the late 1950’s and early 1960’s working at the Hub. “I even spent my summers playing – I mean – working at the shop.”

And he spent his Sundays flying. 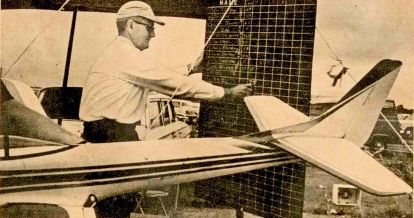 The Nationals were held in Dallas one year in the late 1950s and Rick went to it along with Roy and two other members of the Crescent City Radio Control Club.

He picks up the story: “The stuff we did in New Orleans was neat, but what was done at the Nationals – now that was really advanced. In New Orleans we were flying 2 or 3 channels – like rudder, engine, and elevator. At the Nationals they were using ailerons and flaps and retracts. 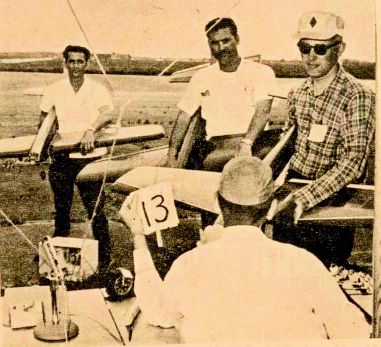 Some of the contestants checking in

It gave us some really good ideas as what we could do. Roy started adding more channels to the radios. (Roy custom-made radios.)

There were even some people flying jets – that attracted some big crowds. I’d never seen anything like that. Being a kid at that time, everything was enjoyable.”

Looking for some project ideas?

Located between N. Turnbull & Cleary
About a block East of Sam's Club, on the other side of the street

A Higher Call   Every time I sell a model of a Me262, I recall an incident that happened when the Hub was still on Broad Street. Scott Scalfani built the Tamiya 1/48 262 pictured here and had it on…
Read more

Creative Repurposing   Modelers are a creative, resourceful bunch. They go to great lengths to repurpose materials to use in their projects. One such incident that comes to mind involved a guy who built a radio control B17. He used…
Read more

Thinning ratios for airbrushing is a constantly reoccurring question and there is no right answer. The most common answer is “thin the paint to the consistency of milk.” . . . Right. . . Whole milk? Skim milk? Buttermilk?  ….
Read more